Skip to content
HomeKeep Your Scale Close, But Your Friends Closer 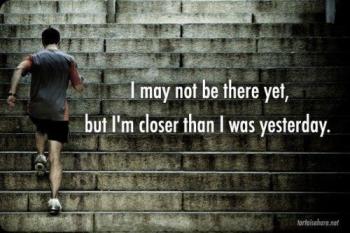 I’m exhausted. I stink, I’m going to have to febreeze my couch at least twice, but I can’t bring myself to get up. I have a bowl of quinoa and braised chicken that was steaming, but is now luke warm and cooling fast -I only have the energy to drink water. My achilleseses…es are tight, and I feel my run in my calves. It’s important to note that I’m sore but not hurt. One more thing: I’m dripping with awesome. That’s right, I said it. You run 5.5 miles through Rock Creek while thunder rolls and the heat smothers and your shirt will be drenched and dripping with awesome too. I didn’t do it alone. Two of the cats on my September 8, Tough Mudder team took me up on my invite to run. The run was tough and I’m not embarrassed to say that I was the weakest of the crew. I ran when I could, walked when I needed, and pushed as hard as I could.

Two weeks ago I lost my focus. I allowed my scale to determine my success. It gave -showing that I’d lost pounds, then it took -after two additional days and 5 workouts, It told me that I’d gained a pound and a half. Completely bummed, I shut it down, I stopped working out, and two days later, I’d lost 2 pounds. Rather that be glad at the loss, I was all the more pissed because I couldn’t figure out what was going on.

The next week, two people, a friend and a colleague (two separate people) mentioned that I looked like I was losing weight and I rediscovered a long lost notch on my belt. I call all three wins.

It’s easy to get caught up. I’ve been working hard and I really want to see results. But what I need to remember is that the scale doesn’t care about me, know how hard I’m working, or care if my weight is due to muscle, fat, or water. Please believe I’m not convinced that my weight gains are due to muscle gain, but what I’m also coming to grips with is that it doesn’t matter. My scales motivation is short-lived and it’s support is fickle. Henceforth, I’ll use my scale for what it is, simply a tool. My true tests of fitness will be my clothes, my belt, and my ability to run a little bit further, faster and harder each and every time I attack the park.

*Note: I eventually ate. It was cold but good.

3 thoughts on “Keep Your Scale Close, But Your Friends Closer”