Skip to content
HomeFortifying my Foundation
My boy Kobina (Kob) is a jerk. In his defense, we (our crew) ‘re all jerks. So much so, we refer to ourselves as “The Usual Suspects” (an homage the greatest ensemble of degenerate jerks cinema has ever depicted), or “The Jerks” (a nod the Steve Martin flick that took being a jackass to a whole different level). All that said, Kob’s a Jerk of the highest order. In a conversation we had Saturday, he asked me about my weight loss. I mentioned that I had lost 30 pounds. Without missing a beat he asked me if I were “doin in clean” (as a result of my past HCG Fueled weight loss) or if I were “cheating again?” A fair question, even if mean, I answered, “this time its straight up exercise and eating right. No gimmicks. Feeling good about myself I offer that I’d found a secret that was propelling my weight-loss. When he inquired, I explained that my biggest muscles were in my legs. So when it came to working out, I work my legs the hardest and the most often. As a result, I get the hardest burn and I see the results on the scale. Kob, never missing an opportunity to rain on my parade, responded, “that’s all well and good but what you need to be doing is working on where you’re weakest.” Kob’s words ate at me all day. Not because they were condescending nor malicious (they weren’t).  The reason why I love Kob is because he tells me the truth. This time was  no different. Sunday morning, as I sat in church, I meditated on what my friend told me and came up with the following four platforms upon which I want to build my foundation. 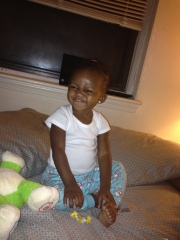 True story: Baby Didds (18 months old now), her mother, and I were sitting on the couch. I was holding the Kidokeydoke as her mother fed her. All of a sudden Ella climbed out of my lap, up past my shoulder, onto the back of the couch. As I turned to see what she was doing, she mule-kicked me twice in my face, once in my nose, and another time in my jaw. Without saying a word, I picked up my daughter by her feet and held her upside down in front of my face and said very evenly in my upside-down kids face “we do not kick.” I then took our daughter to her nursery with her frantic mother trailing behind me. I put Ella in her crib and very flatly told her mother that Ella was not to be removed from the crib for 1 minute. I sealed my statement with a look that said, “if you touch her, you’ll be in the crib with her.” Ella cried and her mother pouted. We were never more than a foot and a half from her, but we did not touch her, and every time she stretched out her arms, I looked her in the eyes and told her that we do not hit, and we do not kick. A min later, I picked Ella up, told her I loved her, kissed her and held her. She stopped crying and would not let me go. I would have understood if she had preferred to be held by her mother at that point, but I was glad when she resisted any effort to remove her from my shoulder. I do not claim to be a good father. What I aspire to be is thought-out, not

reactionary, loving, nurturing, and stern. I have a lot to learn, but I am committed to the journey

I do however hold myself to a simple standard. If you did not tell anyone, would people be able to tell that you are a man of God by your actions? For too many reasons, the answer to that question of late would be NO. I have been so committed to my newer interests, that I have let my spiritual obligations fall short. Today in church, a parishioner and friend greeted me and told me that she had seen me a few weeks ago walking with my daughter up 16th street. I told her that carrying her on my daily walk was the best way to get my cardio in. While true, the response was intended in jest but after I said it, a light bulb went off: my platforms need not take away from each other. In fact, when built evenly, they are all stronger. My walk as a Christian will be lifelong, but just like working on my core, it will impact everything else I do for the better

I do not need to reiterate my commitment to health and fitness here. However, it is something I intend to

make a way of life. If for no other reason, my efforts have a good chance at lengthening the time I have to hone the other three objectives.

My work is the engine that drives my life. Clearly it’s not what makes me a father, Christian or healthy but it greatly impacts the quality of my commitment to each. Therefore, its imperative that I build a professional foundation which is sure, and grounded in work that is high-quality and representative of my best efforts.

I have a long way to go. Ironically, as hard as I have worked these last few months, I think my health and fitness platform may be the easiest of the four to establish. I do not expect my road to be easy, but I am up for it. More than anything, I am glad I have Jerks like Kob in my corner to keep me honest.

Meatless Monday – I didn’t prep anything. I’ll be free styling it.

3 thoughts on “Fortifying my Foundation”